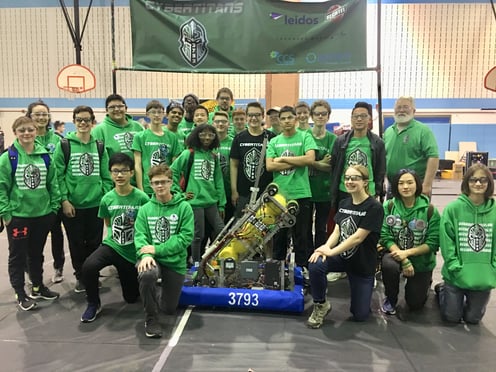 CCS is a proud sponsor of the CyberTitans Robotics Team, a group of high school students that compete in robotic tournaments around the state of Maryland. The group meets and competes out of Tuscarora High School in Frederick, MD, just a ten-minute drive from CCS’ headquarters.

The CyberTitans are a competitive robotics team consisting of students from several Frederick County High Schools. They participate annually in the First Robotics Challenge (FRC) through FIRST, the world’s leading youth-serving nonprofit for advancing STEM education.

Each year the CyberTitans design, build and program a robot to compete in a game against other robots from around the world. For the 2020 competition, this group of creative high schoolers built a 120-pound robot and affectionately named it “Howitzer,” paying homage to a type of artillery piece capable of accurately launching heavy projectiles with pinpoint accuracy at great distances. The name was quite fitting considering Howitzer’s job at this year’s competition was to launch dodgeballs into the air and successfully land them into two different goals, one of which was eight feet tall!

Howitzer was designed, built and programmed by the students with a variety of real-world tools that engineers like the ones at CCS use on a day-to-day basis.  CAD modeling, CNC machinery and 3D printers were just a few that the team utilized to build their robot. Howitzer’s programming made it smart enough to find the goal on the field, calculate the angle needed to shoot and successfully launch the ball into the goal. As part of the competition, Howitzer also had to grab a bar raised five feet off the ground and pull itself up using a deployable hook and winch system.

The team was signed up to compete at two different 2020 events, one in Bethesda, and one in Owings Mills, MD. Unfortunately, these events occurred right at the beginning of the COVID-19 pandemic and as such the team was only able to compete in the Bethesda competition.

Once the competition started, the team struggled with electrical issues with the drivetrain. Like all good engineers, with some quick thinking and a healthy dose of trial and error, they were able to recover and make it all the way to the event finals. The team was hoping to carry its success into the District Championship in Hampton, VA and the World Championship in Detroit, MI, but will have to settle for finalists this year.

Looking to the future, the team normally holds workshops, summer camps, and participates in off-season events to prepare and practice for the upcoming season in January. This season, the team will be looking at learning things virtually to hopefully participate in a competition this spring.

Sponsoring these students has been a rewarding experience for CCS. We’d like to thank the team and coach, Joshua Holmes, for representing CCS and Frederick at this year’s competition. We look forward to sponsoring the CyberTitans again in the future.

We promise that we won't SPAM you.